Five years after the revolution, Tunisia’s black minority has yet to experience the freedoms enjoyed by other citizens.

As the celebrations of this remarkable achievement began to quieten down, people got ready to enjoy the benefits of liberty – especially those to do with fairness, human rights and equality.

And indeed, many of those benefits did follow; even though many Tunisians continue to feel economically marginalised and the country faces security problems, for the most part the repression that was such a feature of the Ben Ali years has gone. Tunisia is widely regarded as one of the few successes of the Arab Spring.

But not all Tunisians would agree. Five years on from the revolution, the country’s large black minority – roughly about 15 percent of the population – say they have yet to fully experience the freedoms that their fellow citizens enjoy. They say that racial abuse and discrimination are still widespread in a society that is supposed to have done away with inequity and prejudice – and that the authorities are failing to take action. 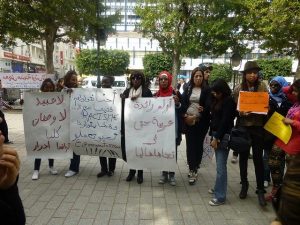 Racism is, to varying degrees, a problem for almost every society in the world.

In the West, Islamophobia appears to be on the rise, fuelled by public anxiety over the influx of refugees into Europe from the Middle East and North Africa.

In the United States too, politics appears to be ever more polarised. A year which has seen Donald Trump’s highly controversial and, some would say, openly xenophobic views edge him ever closer to the Republican Party’s presidential nomination has also borne witness to numerous reports and leaked videos of alleged police brutality against members of the country’s black community.

But what sets Tunisia apart from these examples is the fact that racism, though clearly evident at almost every level of society, is rarely, if ever, publicly acknowledged. In Tunisia, racism is shrouded in a blanket of denial that rarely permits anyone to see it with clarity. A desire to remove this shroud and shine a spotlight on this deep-seated intolerance gave me the impetus to make this film.

As our investigation would reveal, discrimination is a shockingly everyday occurrence for black Tunisians. Although no official statistics exist, around 15 percent of the country’s population is believed to be black, while the majority of the remainder regard themselves as “white”. To some outside observers, this labelling might appear strange given the country’s unique and rich African-Arab identity, but it is part and parcel of the way Tunisians think of themselves and, apparently, compartmentalise those around them.

In 2011, Tunisia shook the world as daily street protests eventually led to the toppling of the government, a vanguard for the other Arab Spring protests that erupted successively in countries across the region. Black and white Tunisians stood shoulder to shoulder on the streets calling for the fall of the Ben Ali regime, demanding democracy and a new, more inclusive political chapter in their nation’s history.

But though revolution may have brought about change for many white Tunisians, the rights and freedoms of black citizens seem to have been forgotten – or at the very best to have been selectively granted and protected.

Among the legislative reforms of the past five years was Act 21 which states that all citizens are “equal before the law without any discrimination.”

On the face of it, this might appear to guarantee equal opportunities for all Tunisian citizens irrespective of racial and ethnic heritage, but many black critics argue that it falls woefully short in protecting them from prejudice.

They believe an additional constitutional or legal coda to criminalise racism, which remarkable is currently not defined in law, is now the only way to bring an end to widespread discrimination in public life – as well as silencing the casual racism which pervades the streets of towns and cities across the country. The lack of such a law, they say, means that perpetrators of hate crimes, even when such cases are reported, are never brought to justice.

Black Tunisians have long lived on the margins of their society. Although it was one of the very first territories in the world to abolish slavery and provide legal emancipation in 1846, traces of the slave trade’s legacy linger on. This is perhaps most visible in the south of the country, where many black families still bear the names of their ex-slave owners preceded by the term “Atig”, meaning “freed from”.

While filming in Tunis, we heard rumours that even cemeteries in the rural south were divided along racial lines. In one town in Djerba, for example, we were told that the graveyard for black Tunisians is known as the cemetery of the “Abeed”, meaning slaves. Meanwhile, the final resting place of the local white community is referred to as “Ahrar”, meaning free. It was also alleged that, in parts of the south, segregation along racial lines was so extreme that entire towns were designated exclusively for whites and others allotted only for occupation by black families.

To investigate just how accurate these claims were, we travelled to the region with one of our contributors, a prominent Tunisian anti-racism campaigner. Approaching the town of Sidi Makhlouf, we met fierce resistance from the local police who had somehow heard we were coming and clearly did not want us to document the realities of life in their community.

Once we managed to get past them, we soon discovered why. Hard though it is to believe, we found that in this town separate buses were used to transport white and black children to school – a practice that seems more reminiscent of 1950s America or even apartheid-era South Africa. Members of the local community we spoke to said this practice had begun some years ago when a local mixed-race couple got married and aroused the fury of the area’s “white” majority. Now they don’t want their children to mix with those from black families.

But this isn’t just a rural phenomenon. In the capital, Tunis, many of our black contacts told us that racism was evident in everything from “the looks people give you” to the menial jobs most black people were offered. On a number of occasions we ourselves witnessed white Tunisians addressing black citizens using derogatory terms such as “Wasif” (servant) or “Kahlouch” (blackie) – which are equivalent to the “N” word used by racists in the West, in their expression of bigotry and contempt. These words often weren’t muttered quietly either – in one football match we went to see, the black referee was unashamedly subjected to a loud barrage of deeply offensive racist insults from watching supporters.

Yet perhaps this is the moment when the shroud of denial is finally begin to lift. Racism in Tunisia has recently gone from something to be denied and ignored to becoming the subject of regular street protests.

Discrimination permeates school life, the workplace and the street, but there is now at least a glimmer of hope as Tunisia’s small but increasingly vocal civil rights movement gains momentum. Indeed we followed one group as they delivered a plea for help to Tunisia’s human rights minister. His promises to act – though a little light on detail – were at least a sign that some in authority are now beginning to listen.

This article was originally published on Al Jazeera: http://www.aljazeera.com/programmes/peopleandpower/2016/03/tunisia-dirty-secret-160316153815980.html

The first issue of the year (19/1) of the International Journal of Francophone Studies, edited by Margaret Majumdar and Fabienne Chamelot, addresses Francophone perspectives on Progress, change and development.

“While the perspectives underlying these texts are very different, what unites the subject matter is the underlying preoccupation with history as progress. While some accept the ideals of modernity, freedom and economic, social, political amelioration and focus their critique on the deficiencies of their implementation to date, others channel their work more to unpicking the unintended effects of historical change, challenging received wisdom to date and the analysing the cultural processes and products through which many of the ensuing contradictions are articulated.”

Reading between the lines: Identity issues in Kanak narratives and the agency of the storyteller
Authors:  Catherine O’Connell

The ‘Wretched of the Earth’ – then and now
Authors:  Margaret A. Majumdar