On Wednesday 11 March 2015, the Francophone Africa, Languages Across Borders, and International Development Studies and Security Issues research clusters in the Centre for European and International Studies Research (CEISR) at the University of Portsmouth jointly organised a study day focusing on “the power of language in post-colonial Africa”. The aim of this interdisciplinary event was to bring together African and European writers and scholars to explore the uses, misuses and challenges facing the former colonisers’ languages at a local, regional and national level in Anglophone, Francophone and Lusophone sub-saharan Africa.

The event began with a brief introduction, where the conference organisers, Olivia Rutazibwa (International Relations/ EU Studies), Mario Saraceni (Languages/ Linguistics) and Joanna Warson (History/ Area Studies), explained their research background and interest in the conference theme. The first panel concentrated on Anglophone and Lusophone Africa, with papers from Tope Omoniyi (Roehampton) and Margaret Clarke (Portsmouth). In his paper, Prof Omoniyi, a sociolinguist, considered the relationship between public health and language, focusing especially on the current Ebola outbreak in West Africa. In particular, Prof Omoniyi emphasised the persistent gap between policies that assert the importance of making multilingual resources on public health available and the reality on the ground. The geographical focus shifted for Dr Clarke’s paper, which explored the adoption, adaption and evolution of the Portuguese language in Angola and Mozambique in the post-independence era.

After a short break for tea and some delicious homemade cake, we resumed proceedings with a panel on Francophone Africa. Brenda Garvey (Chester) explored the development of urban Wolof in Senegal, addressing the ways in which this language borrows and mixes with the language of the former colonising power (France). In Garvey’s view, this linguistic hybridity and flexibility, alongside urban Wolof’s conviviality and colloquialism, makes it possible for people who are not ethnically Wolof to use and identity themselves with urban Wolof. Based on his own experiences as a writer, Felwine Sarr (Université Gaston-Berger, Saint-Louis, Senegal), who is also an economist, analysed ‘Writing as an idiomatic construction of singularity’. In this paper, Prof Sarr argued that the foreignness and strangeness of languages makes them all equal. Thus, according to Prof Sarr, we are all exiles in language. 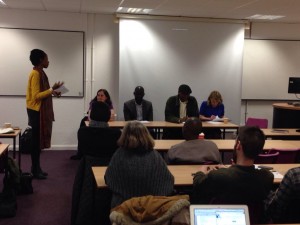 We would like to thank everyone who participated in this study half day for their excellent papers and interventions, which prompted though-provoking debates, especially about the role of local and European languages in shaping identity, policy and continued efforts towards decolonisation in sub-Saharan Africa. We would also like to thank the Centre of European and International Studies Research and the School of Languages and Area Studies for generously supporting this event.

This study day was attended by students from across the School of Languages and Area Studies. Here, some of the students who attended share their thoughts on the event.

Megan Ison (BA (Hons) French Studies, Year 1): As a language student, I thoroughly enjoyed exploring the importance of language in post-colonial Africa, and the presentations have taught me that language is about far more than syntax and grammar. I particularly enjoyed learning about the power of minority languages, which is something that I have never appreciated before. For example, I valued Tope Omoniyi’s account of how communities in Africa were able to educate each other through song in their native language about how to prevent Ebola, in ways that Western propaganda failed. Thank you very much for organising such a thought-provoking afternoon!

Nicola McKay (BA (Hons) International Relations and Languages, Year 4): I found the study half day on ‘the power of language in post-colonial Africa’ very interesting and thought-provoking as it gave me a chance to learn more on topics that my course doesn’t necessarily cover, such as Lusophone Africa and the use of Wolof in urban Dakar. I also found it a great opportunity to speak to academics from outside the University as well as mixing with other like-minded students.

Lianne Walters (BA (Hons) Applied Languages: French and Mandarin, Year 3): Attending the half day seminar about ‘the Power of Language in post-colonial Africa’ was an absolute delight. All the presentations given were not only engaging but inspirational, motivating participants to let their minds wander and explore the colonialist issues faced by Africa’s nations and its people. We were encouraged to question whether today’s Africa truly is post-colonial as it is so commonly understood to be. Despite identifying the problematic position of the former colonisers’ languages in African culture, in both domestic and global arenas, some papers also discussed less negative aspects of the use of of European languages in Africa. Brenda Garvey, for example, interestingly addressed the pluralism and fluidity of urban Wolof, which allows its speakers to self-identify according to the linguistic markers that exist in the language. I personally benefitted greatly from what Prof Tope Omoniyi shared about the importance of naming rituals in reference to how the Ebola virus came to be termed. I also very much enjoyed Dr. Felwine Sarr’s persuasive exposition of idiomatic singularity and the risk of captivity, uniformity, and imposed inferiority that comes with use of a language. My most heartfelt thanks goes to all the brilliant speakers at the workshop, and the University of Portsmouth for hosting the event with a provision of great homemade cakes, tea and coffee!