2014 marks twenty years since the Rwandan Genocide. In this post, Rob Coates assesses France’s role in the Genocide and its impact on Franco-Rwandan relations to the present day. Rob recently submitted his MA Francophone Africa dissertation on commemoration, textbooks and music as means of post-genocide reconciliation in Rwanda. He spent January to April of 2014 working at the Commission Nationale de Lutte Contre le Génocide (CNLG) in Kigali.

During the 20th commemoration activities of the Genocide against the Tutsi in April 2014, international solidarity in the face of this heinous tragedy had one notable absentee: France’s delegates stayed at home and the ambassador to Rwanda was banned from the Kigali Genocide Memorial. This was the latest instalment in an international row between the two countries. The bone of contention? France’s role in the run up to, during, and after the 1994 Genocide against the Tutsi.

Although hesitating to name France by name, President Kagame’s speech couldn’t have been clearer in its denunciation of French policy to let sleeping dogs lie: “The passage of time should not obscure the facts, lessen responsibility, or turn victims into villains. People cannot be bribed into changing their history. And no country is powerful enough, even when they think that they are, to change the facts. After all, les faits sont têtus. Therefore, when we speak out about the roles and responsibilities of external actors and institutions, it is because genocide prevention demands historical clarity of all of us, not because we wish to shift blame onto others.” (Paul Kagame, 7th April 2014, Amahoro Stadium.)

In the interests of this fabled ‘historical clarity,’ France’s role in the dark and sombre 100 days of Rwanda needs to come to the surface, and, if France herself is not prepared to do so, then I suppose this blog must! (It must be stated that, because of limits of space, this can only be a brief overview.)

During the colonial period, Rwanda was claimed first by the Germans and then, after World War I, by Belgium. France’s interests in Rwanda came later, after independence, under the Presidencies of Kayibanda and Habyarimana. One aspect of this was the signing of, among other unilateral treaties, a Special Military Assistance Agreement in 1975, modified in 1992 to reflect the reality of French technical assistance at all levels of the Rwandan Government’s military forces. This point is perhaps best illustrated by this famous image (used in genocide memorials in Rwanda) showing, French military personnel (in the jeep, cigarette in mouth) driving alongside a platoon of Hutu shouldering les armes blanches: 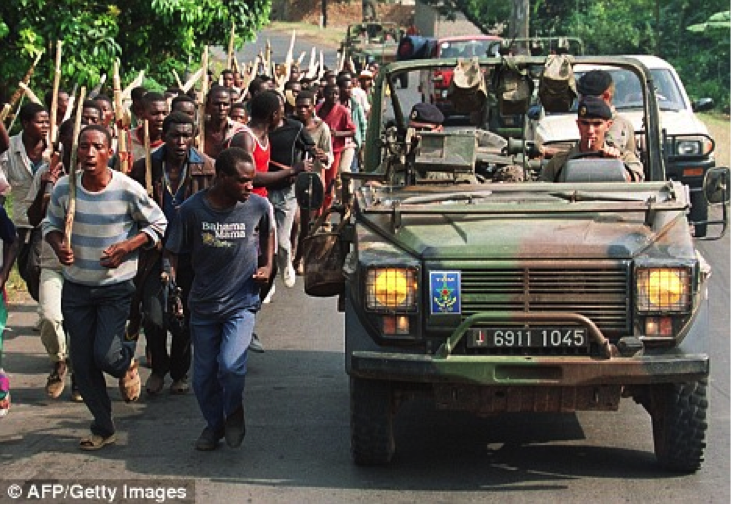 French cooperation prior to 1994 with the almost exclusively Hutu military was just the tip of the iceberg, but France’s activities in Rwanda did not cease during the Genocide against the Tutsi either.

The most infamous operation of the period – Turquoise – was initially a much delayed humanitarian relief effort, which resulted, ironically, in providing many of the high-level Hutu perpetrators with safe passage to Zaire and international exile.  Operation Turquoise could also be used to epitomise both the horror of genocide and the indifference of the international community, through the actions of French troops at the Murambi Technical School.  Before the arrival of French troops, Murambi had been the scene of one of the worst massacres of the genocide – more than 40,000 Tutsi lured to a place of apparent safety before being systematically slaughtered.  The school was then used by the French as a base of operations where, for their own entertainment, they constructed a volleyball pitch on top of the mass graves.

After the genocide, France has become a haven for the escaped génocidaires.  While the recent trial of Simbikangwa points to a new direction for the French legal process, many other génocidaires have sheltered in France for some considerable time, with little action to bring them to justice: Agathe Habyarimana (the assassinated President’s wife) is perhaps the most high profile of these.

Although this is a quick summary of almost 60 years of the history of the Franco-Rwandan relationship, it is something that deserves greater study.  Former French President Sarkozy admitted in 2010 that French errors may have led to the Genocide, but the political rapprochement made there has been undone more recently.  What is true, whether the French government like it or not, is that although all of the blame cannot and should not be laid at France’s door, France must still face up to the responsibilities brought on by her actions.  Recognition would be a good start.  Studying the period and prosecuting génocidaires resident on French soil would be even better.