Dr. Joanna Warson is currently in Senegal working at the BBC Service Afrique Dakar bureau. In this post, she shares some of her experiences there so far.

I walked out of Dakar airport at about 11pm on Sunday night. I was exhausted and feeling a little anxious. Would my pre-arranged taxi be there to meet me more than 24 hours after my scheduled arrival time of 9pm on Saturday? A 24 hour delay in Madrid and a two hour queue to get my Senegalese visa[1] had upset my carefully laid plans. And, although I had been in touch with my contacts in Dakar to advise them of my late arrival, I knew that I wouldn’t relax until I was sat in the back of the taxi sent for me by the BBC. My eyes scanned the sea of unfamiliar faces. There were lots of men shouting “taxi” at me, but how was I ever going to find my taxi driver? I was starting to meet a bit panicked when I saw a sign in the crowd saying “Joanna Warson BBC” and heaved a huge sigh of relief. Within a few moments, my suitcase was in the boot of the taxi and I was on my way my home for the next five weeks…

Now, as I write this post, I can hardly believe that all this happened over two weeks ago. Despite lengthy travel delays getting my trip off to a somewhat inauspicious start, I am now feeling settled in Dakar and am very much enjoying my stay here so far.

The main purpose of my trip to Dakar is to complete a stage (work placement or internship) at BBC Afrique, the French language service of the BBC. Over the past two weeks, I have received an introduction to the workings of this international radio station. I can usually be found in a quiet library or archive, or reading or writing on my own in my office, so it is quite a change for me to be working in the middle of a bustling newsroom. There is always lots going on: news constantly flashing on the wires, telephones ringing, discussion and debate about breaking news, interviews being arranged and taking place, furious typing… The busiest times are always the hour or so before the main news bulletins, when everyone is rushing to make sure everything is ready to go. BBC Afrique has three main shows throughout the day – BBC Matin (4.30-8.00 GMT), BBC Midi (12.00-12.30 GMT) and BBC Soir (18.00-18.30 GMT). It has been interesting to sit in on a couple of these live broadcasts and get a behind the scenes insight into how the shows are produced. 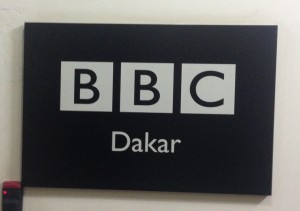 There is of course a lot more that goes into each and every BBC Afrique broadcast. And this is where I have been able to contribute rather than just observe. For the last two weeks I have been working with the late team (I work from 13.00-22.00, although the editors normally stay until midnight) to prepare items for BBC Matin. For me, this has involved two main jobs. Firstly, I prepare cues and despatches on breaking international news items. Sometimes this is a simple task of translating an existing despatch from the BBC World Service into French. More often, however, it involves synthesising a number of different despatches from different news agencies (BBC World Service, Reuters, AFP etc.) in both English and French, verifying and adding factual information where necessary. No despatch is allowed to exceed 1 minute and 30 seconds, so this has been great practice for writing concisely! It is also necessary to make sure that the language and tone are radio friendly, something that has taken a bit of getting used for someone more accustomed to writing for academic audiences. My second main role involves preparing quotes collected by BBC agencies for inclusion in a news bulletin. These quotes (given by the main protagonists in current news stories) are rarely in French, so the first task is to translate them so. Someone then records that French text (usually this is one of the journalists but I have also had the opportunity to record one voiceover myself!) so that I can mix it with the original recording. It is then ready to be used as required during BBC Matin, when it will be introduced by one of the presenters with a cue that I have prepared.

Alongside these tasks, I also participate in daily editorial meetings. The main one takes place at 14.30. At this meeting, the main news stories of the day are discussed and plans are made for the evening and morning broadcasts. African news, and particularly Francophone Africa news, is always first on the agenda, something that is mirrored in the programmes broadcast on BBC Afrique and the discussions that can be heard in the newsroom throughout the day. Whilst this is not in itself particularly surprising at a news service called BBC Afrique, based in Senegal, I have nonetheless been struck by the way in which the BBC’s Dakar Bureau is at the forefront of writing news about Africa, and especially Francophone Africa, for a global audience. As Mila Kimbuini, a BBC Afrique journalist from Kinshasa (Democratic Republic of the Congo), put it to me: it is the job of the journalists here to delve deeper into the stories of violence, disease, famine and corruption that frequently dominate Western media accounts of Africa, revealing their full complexity beneath these antiquated stereotypes. It is also the responsibility of these journalists to go beyond these negative headlines, to research, write and broadcast the stories that matter to ordinary people living in Africa today. 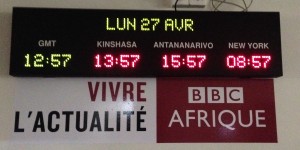 [1] Senegal will abolish the visa for fee for tourists (currently 52€50) from 1 May 2015 in an attempt to encourage tourism in Senegal.