Sunday 19th April 2015 brought the highest loss of life yet seen in the ongoing Mediterranean refugee crisis as an estimated 800 people drowned when the boat they were on capsized 60 miles off the Libyan coast. Prior to this latest disaster Ed Naylor spoke to documentary-maker Jakob Preuss about his recent experiences filming with migrants seeking to cross into Europe. Jakob’s award-winning films have ranged in subject matter from Iranian youth (Torn Iran, 2003), Bosniak returnees a decade on from the Srebrenica massacre (The Unburied War, 2005), and most recently the politics of football, oligarchs and the post-Soviet economy in Eastern Ukraine (The Other Chelsea, 2010). His latest film, entitled ‘Europe’s Borderlands’ (Europas Grenzen), is due to be released early next year. In the first of a three part series, Ed and Jakob discuss the background and development of ‘Europe’s Borderlands’, and the current migrant crisis in the Mediterranean.

Your previous films have tended to focus on places and themes that are over-looked or ignored by the mainstream media, though in the case of Torn Iran (2003) and The Other Chelsea (2012) subsequent events brought a great deal of attention to the questions your films raised, with the ‘Green Revolution’ of 2009 and the current conflict in Eastern Ukraine respectively. In this latest project you seem to be addressing an issue that is already very much in the public spotlight. What drew you to the subject?

It’s true, migration and European border policy are widely discussed subjects at the moment. In fact, they were also very much in the news a decade ago. I suppose it’s a subject that comes and goes in the mainstream media. When I began researching this project in 2011, it was actually much less in the news than it is now. Since the tragedy of Lampedusa in 2013 (and there have been many such tragedies before and after) and the growing number of people coming by boat from Libya, migration has made a lot of headlines, so you could say that this time I was somehow overtaken by events. But in any case, I don’t choose themes, countries or protagonists with regard to their visibility in mainstream media -it’s more a question of my personal interest, knowledge, curiosity and connections. My film about Ukraine was the result of 15 years work, on and off, connected to the post-Soviet region. With Iran I was just very curious at the time, and in Srebrenica I had a friend working there for the Organisation for Security and Cooperation in Europe (OSCE) who invited me to document the situation ten years after the war. ‘Europe’s Borderlands’ initially came out of an idea to make a film about Europe from the inside. I have a Masters degree in European Studies from the College of Europe and have worked on European affairs at the German Bundestag. On top of this, borders have always fascinated me -growing up in West Berlin, the experience of the wall made a deep impression on me. So I was immediately interested when friends of a production company approached me to work with them on the concept for a film about European borders. Perhaps because of the relative success of my last film, we got the money together unexpectedly quickly – perhaps even a bit too quickly before I had a clear idea myself about what I wanted to do. Over the course of the last 3 years, I’ve been learning a lot about migration policy and border policy. In that time the focus has shifted from an anecdotal film about various border-points of the European Union to a more focused story about the journey of a Cameroonian migrant, Paul, and the system of border controls and obstacles he is confronted with. From the initial idea of making a film just about border guards, European agencies and politics, I ended up opting to tell the story of an individual whose journey deeply moved me, and who has as an antagonist a pretty sophisticated yet strangely incoherent system of surveillance and discrimination.

The EU frontiers you explore are essentially those to the east and south. Do the land and sea borders have much in common? Has the rising toll of deaths in the Mediterranean -around 3500 in 2014 according to the UN Refugee Agency (UNHCR)- shifted the film’s centre of gravity southwards?

I’m now concentrating on the borders of Morocco and Spain. I’ve made numerous research trips to other borders (Greece/Turkey/Bulgaria, Poland/Ukraine, Belarus and Malta,) but in the end I decided to focus on the Western Mediterranean. There were several reasons for this. In Morocco most of the migrants are from West Africa and speak French very well, a language I also speak, along with Spanish, which facilitates the work on the other side. It’s also safer – even if still pretty difficult – to get in touch with migrants there than in Libya, from where most refugees depart these days. In the beginning I was planning to tell the story of a Guinean man attempting to climb the fence surrounding Melilla (the Spanish enclave on the Moroccan coast) but he succeeded in making it through a week before I started to shoot. At that point I shifted focus to a Cameroonian migrant, Paul, who wanted to cross with a “patera”, a small boat. These scenes are still far away from the current “hotspot” which is the central Mediterranean route from Libya to Italy, and more recently departures directly from Turkey and Syria. The Western Mediterranean crossing via Morocco has been used by pretty stable numbers of migrants and there are far fewer casualties because it is organised much more professionally. Of course, that doesn’t mean that it is safe: in the boat Paul took last December, half of the passengers (23 people) died during the passage, eight of whom were babies or small children. 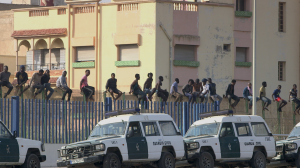 Given its remit, the UNHCR seems at pains to distinguish between migrants escaping economic hardship and refugees displaced by conflict. It estimated that in 2014 more than half of the latter came from Syria and Eritrea. Does this theoretical distinction mean much in practice?

Most of the migrants from West Africa who I met in the forests of Morocco didn’t even want to ask for asylum. They’d left their home countries in search of a better life, sometimes out of clan or tribal problems, very rarely out of “pure” political problems or because of war (though this was often the case for Malians). The Syrians who pass via Morocco have a significant advantage not because of their status but because of being “Arabs”: they can buy Moroccan documents and pass the border to Melilla at a checkpoint posing as Nador residents. Because of a special agreement, the inhabitants of the border town of Nador can enter Melilla without visas (though not the Spanish Peninsula). The Spanish border guards have no time to check the documents thoroughly because thousands cross this border for trade every day. Once in Melilla the Syrians apply for asylum and are then sent to mainland Spain. It’s mostly Syrian Kurds who take this route. The thing is that you can’t decide beforehand whether somebody has a right to asylum or not, so you have to provide safe entry at the first stage. To only help migrants once they are in peril on the open seas is absurd. On the other hand, there are not enough ways for economic migrants to enter. In Germany, for example, the only way to gain entry to the system is via an asylum application – unlike in Spain where most migrants don’t even bother to ask for it. That’s one reason why the number of asylum applications in Germany is so high relative to other European countries -there is no other way to get any kind of document.