Sunday 19th April brought the highest loss of life yet seen in the ongoing Mediterranean refugee crisis as an estimated 800 people drowned when the boat they were on capsized 60 miles off the Libyan coast. Prior to this latest disaster Dr Ed Naylor spoke to documentary-maker Jakob Preuss about his recent experiences filming with migrants seeking to cross into Europe for his film entitled ‘Europe’s Borderlands’. In the second of our three part series, Ed and Jakob discuss some of Jakob’s encounters with migrants on the southern side of the Mediterranean.

What reactions have you encountered from people you’ve approached to film? Has the growing journalistic interest created suspicion?

The West Africans I met who were living in the forest in Morocco are in a sense “professionals”, pretty used to the visits of journalists, activists and to a lesser extent film-makers. There is a delicate ethical issue since people naturally expect something in return but paying protagonists to appear on film would completely undermine the dynamic of the relationships I try to establish in my documentaries. In practice, we brought food, medicine and supplies whenever we visited the camps regardless of whether we were filming. There was a funny moment when I began filming with a Cameroonian group: one woman was surprised that I hardly asked any questions. She said “What kind of interview is this going to be, if you don’t ask us anything?!”, and a companion of hers answered: “Don’t be stupid, it’s a documentary, just act as if he wasn’t there!”. People have also invited me to go back with them to their home countries once they’ve crossed into Spain. I will try to include these scenes in my film since it is quite an interesting second dimension. Some migrants – bored by their long days waiting in the forest – start to develop their own scenarios for films, which we discussed. Of course, it’s an odd sort of relationship for both parties and it didn’t always go smoothly. The last day of shooting just before leaving we were threatened in the forest by some of the young men, we had just spent a very intense week with. They held us for two hours and asked for money – in the end it was mainly to scare us and they certainly succeeded. This kind of strategy, making clear that they expect something in exchange, is not shared by all migrants but quite common. If you see the hardships they’re facing it is pretty understandable. Overall, though, the reception we’ve had has generally been very positive.

Which encounters have made the greatest impression on you?

One thing which moves me each time when viewing our material is when these young Cameroonian migrants, most of the time adventurers, often smoking a few too many joints in the forest or drinking vodka (some actually sell vodka to the Moroccans, I’ve no idea how they get hold of it…) started to sing religious (in this case Christian) songs. It’s a strangely biblical moment when these guys (there are some women but not many) sit in their small provisional tents made out of plastic sheeting arranged around a fire, owning not much more than the cloths they wear, praising Jesus as the one who will decide their destiny.

I also met some very funny characters. Super is one of them. He has lived in these forests on the Moroccan coast for almost ten years now, since being deported from Spain in 2005. He calls himself “universel”, meaning that he knows all kind of ways to get over the border: climbing the fence, taking a patera, hiding in a car, false documents and so on. He always says: if I get to Europe it’ll just be for the papers. Then I’ll come back to Morocco and be a tourist guide for journalists and activists. He has found an improbable niche. 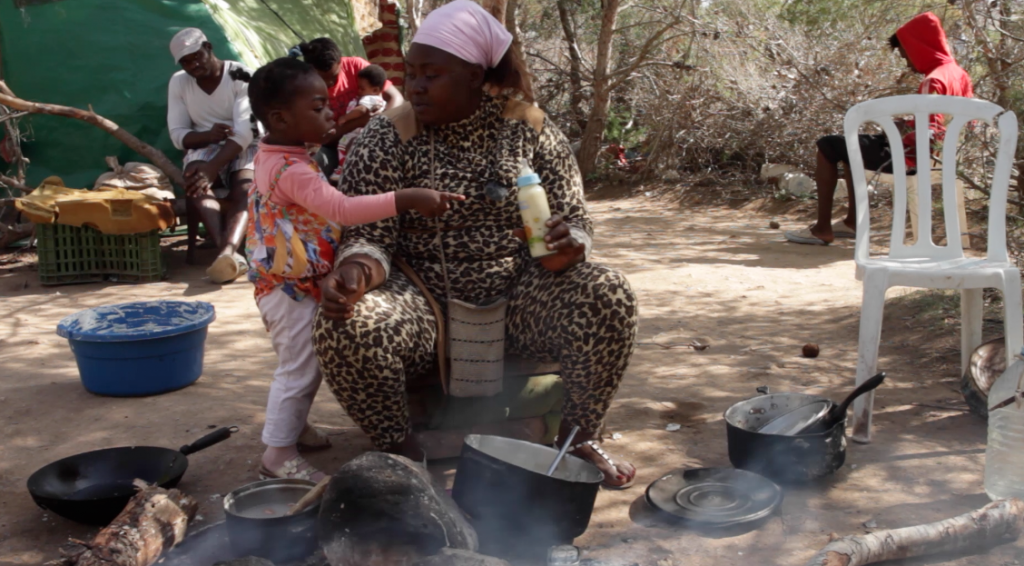 The Maghreb countries play a dual role as places of transit for migrants from Sub-Saharan Africa while also being societies of emigration in their own right. How does that dynamic play out in the places you’ve visited? Are policing and the attitude of local authorities noticeably different towards citizen-emigrants and transiting foreigners?

I have not filmed in Tunisia or Algeria, though I live in Tunis and am editing the film there. I’ve also visited the refugee camp of Choucha during research on the border with Libya but we only took photos there. In Morocco, the clear difference is that a black Sub-Saharan African cannot even get close to the border crossing in Melilla, whereas Moroccan minorscan enter the enclave quite easily. Afterwards, the Moroccan youths often try to hide on the container or passenger ships going from Melilla to the Peninsula, but most are detected before departure by trained dogs. I think that police violence against blacks is much harsher than against the local population although Moroccans themselves are also victims of brutality. Morocco takes back its nationals from Spain on a fairly systematic basis so there are fewer and fewer “harragas” (small boats carrying North African migrants). They try to reach the Spanish coast undetected since the risk of deportation is high. By contrast, Sub-Saharan migrants from Cameroon, Mali or Guinea hope to be rescued once they are inside the Spanish search and rescue zones since they don’t normally face immediate deportation.

One positive thing is that the head of the CNDH (Conseil National des Droits de l’Homme) in Morocco was himself a migrant in France for many years and fought against discrimination there. This personal experience led him to sponsor a new migration strategy that the country’s King has embraced, even if the rather brutal and unlawful raids on the migrant camps in January show that this policy has also had some perverse consequences.

The first part of Ed’s interview with Jakob can be found here.