The latest film by Algerian director, Merzak Allouache, Madame Courage, shown recently at the BFI London Film Festival, is not only a visually striking, well-made production but a stark portrayal of the current state of Algerian society and the hopelessness of the situation of many young people in particular. The main character, Omar, feeds his drug habit by petty thievery; it is the ‘Madame Courage’ of the title which is the nickname for the pills that he relies on to face the world. 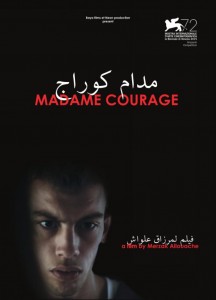 Living in squalor in a shanty town on the outskirts of Mostaganem with his mother and sister, Omar faces the world with a silent defiance, which is only broken when he talks of his father, an oil worker who has died in Hassi Messaoud, and accuses his mother of pimping out his sister for prostitution. Indeed, apart from his mother’s brutal verbal outbursts and the constant playing of a religious radio station to which she is a devotee, silence permeates the whole film, in which there is singularly little dialogue. It is as though social relations have almost completely broken down, along with the social fabric. Thus the screen is taken up with images of Omar moving through the streets – sometimes running, sometimes walking or riding his motorbike, in pursuit of his prey or being pursued himself. Yet, he is touched by the encounter with one of his victims, a teenage schoolgirl whose necklace he has stolen – so touched that he returns it and then begins to stalk her. She is the only beacon of hope in the film, as she engages with her school friends and her family with something approaching normality and compassion. For Omar, as for so many young people, his options soon run out. Debilitated by his addiction and beaten up, he has lost his strength and has nowhere left to go. Even the route across the Mediterranean, which he eyes up from the seawall, is not within his grasp. An extremely bleak film.

More about the film here