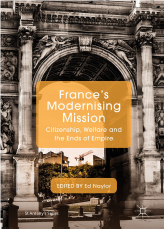 Earlier this year research group member Dr Ed Naylor published the edited volume France’s Modernising Mission: Citizenship, Welfare and the Ends of Empire (Palgrave, 2018), which includes a chapter authored by Professor Tony Chafer. Below is a brief presentation of the book and details on how to order it.

‘This outstanding collection of essays makes original interventions in the related fields of French imperial history, the study of decolonisation, and its legacies in contemporary France.’– Martin Thomas, Professor of Imperial History, University of Exeter

This volume explores how France’s ‘modernising mission’ unfolded during the post-war period and its reverberations in the decades after empire. In the aftermath of the Second World War, France sought to reinvent its empire by transforming the traditional ‘civilising mission’ into a ‘modernising mission’. Henceforth, French claims to rule would be based on extending citizenship rights and the promise of economic development and welfare within a ‘Greater France’. In the face of rising anti-colonial mobilization and a new international order, redefining the terms that bound colonised peoples and territories to the metropole was a strategic necessity but also a dynamic which Paris struggled to control. The language of reform and equality was seized upon locally to make claims on metropolitan resources and wrest away the political initiative. Intertwined with coercion and violence, the struggle to define what ‘modernisation’ would mean in colonised societies was a key factor in the wider process of decolonisation. Contributions to this volume by leading specialists extend geographically from Africa to the Pacific and to metropolitan France itself, examining a range of topics including education policy, colonial knowledge production, rural development and slum clearance.

Part I) Rethinking Education and Citizenship

Available to order online by individuals or institutions at palgrave.com